We’ve put some fantastic miles on the bike since our cross-country adventure last year. It was such an amazing experience that we’re doing it again. Except time we’ll be heading east from Dallas.

When I think back to just a year ago, Leah & I were so excited and nervous about doing this. We asked for and were blessed with so many suggestions about what to pack that I think we incorporated them all. It was a big list and we probably looked like the Beverly Hillbillies.

We feel so much more ready this time around. The big lesson was that it wasn’t about the technology or the gadgets. It was about the road. As each day passed last year, we became unconnected to the world, and closer to God and each other.

Come along this year and we’ll try our best to post after each day’s adventure. We had a ball taking turns sharing each other’s perspective on alternating days. Sign up or click to follow the blog, and check us out at Marriage Matters while you’re in the Like clicking mood.

We’re praying for a similar experience this year. We’re also packing fewer miles into most days so we can spend more time enjoying the locations and meet up with friends along the way. There might even be a Harry Connick, Jr. concert along the way. If you’re along the route, let’s connect if possible.

We’ll be heading toward different terrain than last year, so if you have good advice or experience, we’d love to hear about it. We’re connecting with friends from our church’s small group. It’s a married group of motorcycle enthusiasts from Gateway Church. They’re introducing us to cool places like the Tail of the Dragon at Deal’s Gap, TN and Blue Ridge Parkway, so please pitch in suggestions about these and more.

Here’s a tentative schedule. Let us know if you’re on the route. We head out for June

Charlotte to Bryson City to Chimney Rock to Blackberry Farm

It’s day 2 of the ride with our small group at Gateway Church, and kickstands were up at 8:30 this morning. We showered last night, and I went to bed at 8:45pm. Our alarm went off at 7:30am and we still hit snooze three times.

As most of you know, Scott and I don’t keep regular hours. We’re usually going to bed about the time normal people are waking up to start their work day. But it works for us, and we get more work done with that schedule, so we’ve stopped trying to be “normal.” 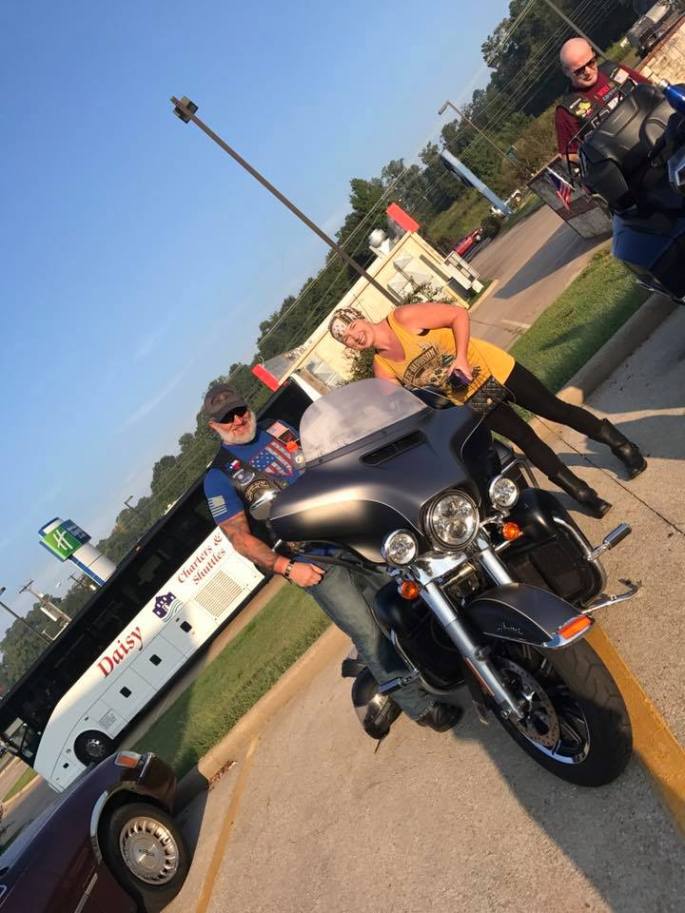 Anyway, we said a quick prayer, threw on some clothes, and were in the parking lot by 8:15. As you can tell by the picture above, it was another scorcher of a day. Scott is full of all kinds of interesting tan lines.

It was a gorgeous ride to Palestine, which was our first stop of the day. The roads were winding and tree-canopied. Unfortunately, I missed some really good photo opportunities, but don’t worry, I’ll tell you about them. The first photo I missed was of a dog jumping on a trampoline. Trust me, it was awesome. Scott and I both saw it at the same time and laughed hysterically.

The second picture I missed was one of the historic cemeteries we passed. There was a big banner sign stretched across the gothic iron gates that said “Homecoming Party, October 2nd.” Scott was like, “I ain’t going to that party.” I also found this hilarious.

We stopped in Crockett, TX for lunch at Arnold’s Bar-b-que. I forgot to take any pictures of it or the delicious brisket I had, so I thought I’d post a picture of these cows instead, since it’s generally the same thing. There are a lot of cows in this part of Texas. 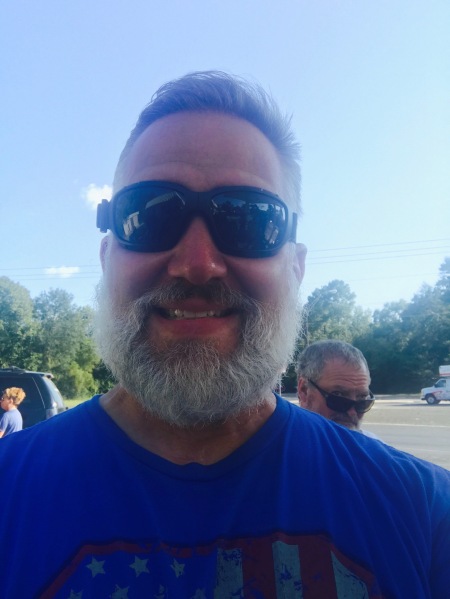 We stopped for gas along the way, and Scott took about a billion selfies on my phone. Are y’all as surprised as I am that his beard still fits in his helmet? Seriously, it’s going to take forever to delete all those selfies. 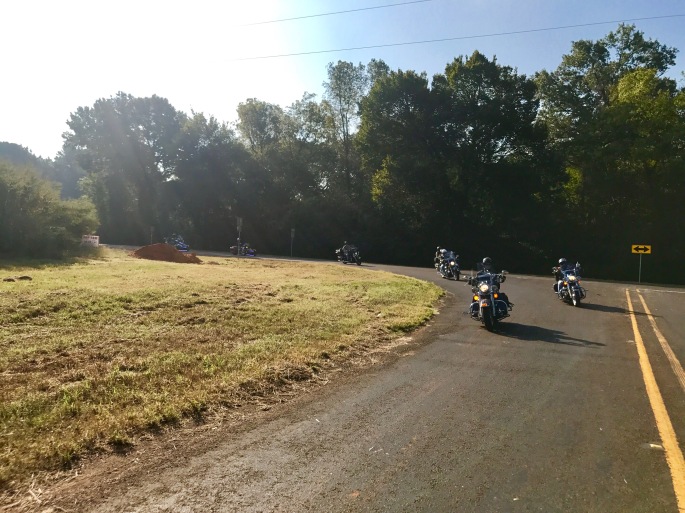 We got back on the bike and it was still hot. But the ride was amazing. Truly a beautiful part of the state. We did a big loop for another couple of hours, and I missed a great picture of a man in a horse drawn buggy. That’s pretty much the story of the day–me missing all the good photo opportunities. 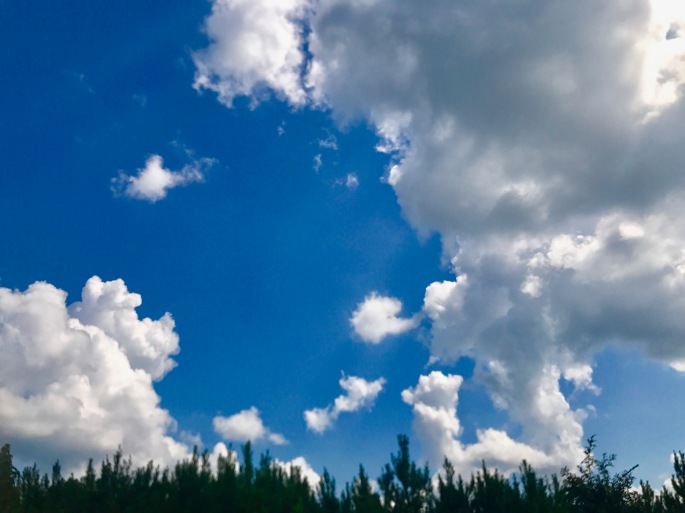 Did I say gorgeous?

And hot? This was the stop where I dunked my shirt in cold water and put it back on.

The hotel was a welcome sight after a nine hour outing, and the good Doctor and I headed straight for the room and a nap. Which means he took a nap, and I thought about napping, because I’m not a good napper. And then we showered and put on clothes that weren’t covered in road grime so we could head to dinner.

I’ll admit that the food has been outstanding on this trip. Y’all know we pretty much live to eat. I’m glad I brought only stretchy pants.

Dinner was at Clear Springs Cafe in Nacogdoches, TX, and I had chicken fried ribeye. Yes, you read that right. It was life-changing. I also had peach cobbler. Scott had cheesecake like usual. The company and conversation was as good as the food.

I’m not going to lie, I’m looking forward to posting this and going to sleep. We have another 8:30 kickstands up in the morning. This trip has been so much fun and has been such a blessing. We prayed for a group to get involved with and get close to, and God gave us this one. It’s been awesome.

Scott’s up for the next post (we’re heading to Louisiana), so we’ll catch you tomorrow!

I’m trying to be organized. No promises though. Each day will be detailed after the day is done (obviously), so keep track and I’m hoping for an undamaged Mac and lots of wifi. In the Menu I set up #HOGWild17 with a drop down for each day.

This is our proposed route below. I say that because our goal was to be in bed early for a fresh morning start. It’s well after midnight and we haven’t finished packing yet.

Things may (will) change along the way.

This is also our official image just above, so when you don’t see us, you will see them. They look happy don’t they? Leah picked it out. It’s not like I’m actually going to offer two pigs ripping across the roadway as the image for our travels, right! Plus, he’s got ink and she’s sporting leather.

#datenight oh, and all of the kids are with us!
So happy to be home with Leah but yesterday was wonderful. Sharing #God’s Word in two services along with my #spiritual father, Larry M Titus at @gracechurchbtx New #relationships were stitched together that’ll bear the fruit of friendship and #love. And after an Uber driver who got lost, a late night supper date with my #wife and a very excited #Frenchbulldog, it’s back to work today!!
What a #blessing it was to #minister to the men’s event at @gracechurchbtx - There’s nothing like a room full of men willing to lay it all down before the throne of grace. Thankful to @kingdomglobal & @larrymtitus #blessed #christ #texas
#worship in #style What’s yours?