Day 6! I don’t even know where to start.

Seriously…the beginning of the day feels like a million years ago. Some of us slept like a baby last night in Rapid City, South Dakota. And by some of us, I mean Scott Silverii.

I finally dozed off sometime around two-thirty after going over our schedule again and playing three hundred and thirty-two rounds of Cascade on my iPhone. I think I was just at the point where I was so exhausted that I couldn’t shut things off.

And then the sun came up, and some of us woke up a good half hour before the alarm was set to go off. “Some of us” once again refers to Scott, and boy, was he bright-eyed and bushy-tailed. From this point forward, Scott will be referred to as BEBT.

We did manage to get out of the hotel a good bit before noon today, and we headed to Custer State Park. The temperature was at least twenty degrees cooler than yesterday, so it felt amazing outside.

We took the Wildlife Loop around the park, and BEBT found himself face to face with his spirit animal. You guys know how much that man loves a donkey.

It’s hard to put into words how beautiful this part of the country is. I can’t count how many times the word “wow” came out of our mouths. And the roads are fantastic for driving.

We left the Wildlife Loop, getting to see numerous donkeys, buffalo, and deer, and headed to Crazy Horse, which was just down the road. You can see Crazy Horse (whose original name was apparently Curly) behind me and BEBT in the picture.

We were starving by this point, so we mosied on over to Laughing Fountain Cafe, where I “think” I had spaghetti and BEBT had chicken strips. I tried to get BEBT to stop in Custer for the #1 rated burger in the Black Hills, but he was excited to see Crazy Horse and missed the opportunity.

We decided they’ve got a lot of work left to do before they finish this thing, but there are plenty of smaller versions all over the place that they were able to make real quick. Like this one.

We were detained for a few minutes at Crazy Horse because of a random thunderstorm, complete with hail. It was weird. And it was over almost before it began, but it got the bike wet, so we were finally able to use the chamois I packed in the emergency bag.

Once we left Crazy Horse, it was time for the Big Deal. BEBT has wanted to see Mount Rushmore since he was a kid. And he was as excited as a kid the closer we got to seeing it.

Black Hills National Park doesn’t disappoint. Every corner we turned revealed jutting black stones, towering pines, and crystal clear lakes. It was majestic and surreal, and I told Scott there was a point as we were climbing the mountain on the motorcycle where tears pricked my eyes.

God’s creation is an absolute masterpiece. 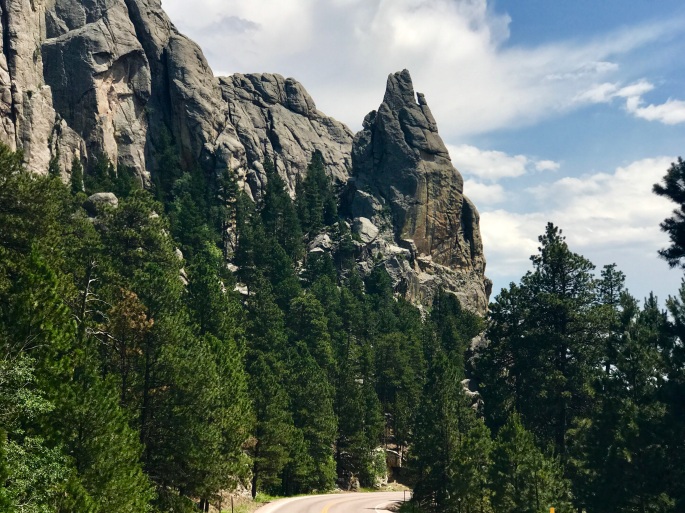 Scott was also excited to learn that Thomas Jefferson made the first ice cream recipe. I didn’t get to read the recipe because I was too distracted by the handsome man in the picture.

Scott was able to share his story with them since he’d also been divorced and single for twenty years before the two of us met and married. They were a sweet couple and we shared some laughs as the man shared what he’d learned about marriage. They recently celebrated their seventeenth wedding anniversary.

After we left Mount Rushmore we made a stop at Black Hills Harley-Davidson. This is the fourth HD shopping trip we’ve made along the way. I’m not sure how we’re getting it all on the bike, but I think we’re going to have to find a post office soon and start shipping things home. It also started warming up about this time. Scott said I was looking a little dehydrated.

We left Black Hills HD and went to Sturgis. Because you can’t come to this part of the country and not make a stop in Sturgis. I love seeing all the bikes parked at the businesses and passing us on the highway. Of course, Sturgis also has a HD store. We went in. You know the rest.

BEBT likes to tell the other bikers that I like to shop in every store we come to, which is true. But I’d like it known for the record that I’m not the only one who likes to shop. See the evidence in the photograph below. These are just a few pieces of his “booty” from today. 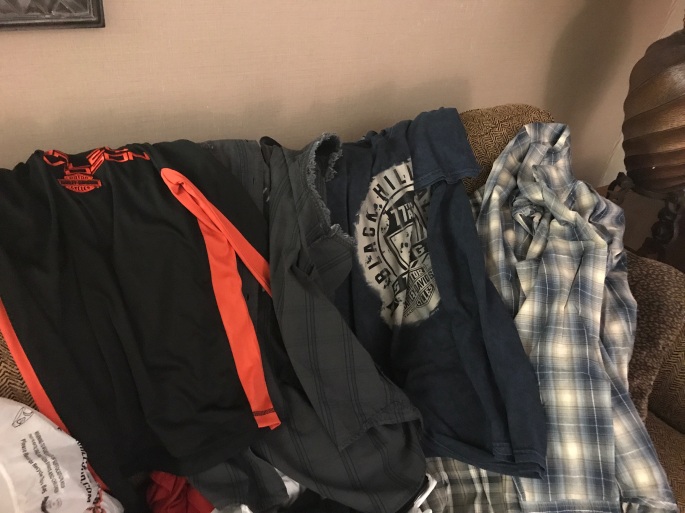 By this point, we were pretty spent. We covered a lot of territory today and saw everything that was on our list of “must sees.” So we got back on the bike and headed to Deadwood. Which I’m pretty sure is going to be the setting of a new novel. It’s a really cool town.

We’ll be up again tomorrow (this time when the alarm goes off), and hitting the road again for Day 7. We’re not a hundred percent sure where we’re going yet. We’re still trying to decide whether we want to head into North Dakota or into Wyoming so we can see Devil’s Tower.

That’s part of the fun! We’ll figure it out later. 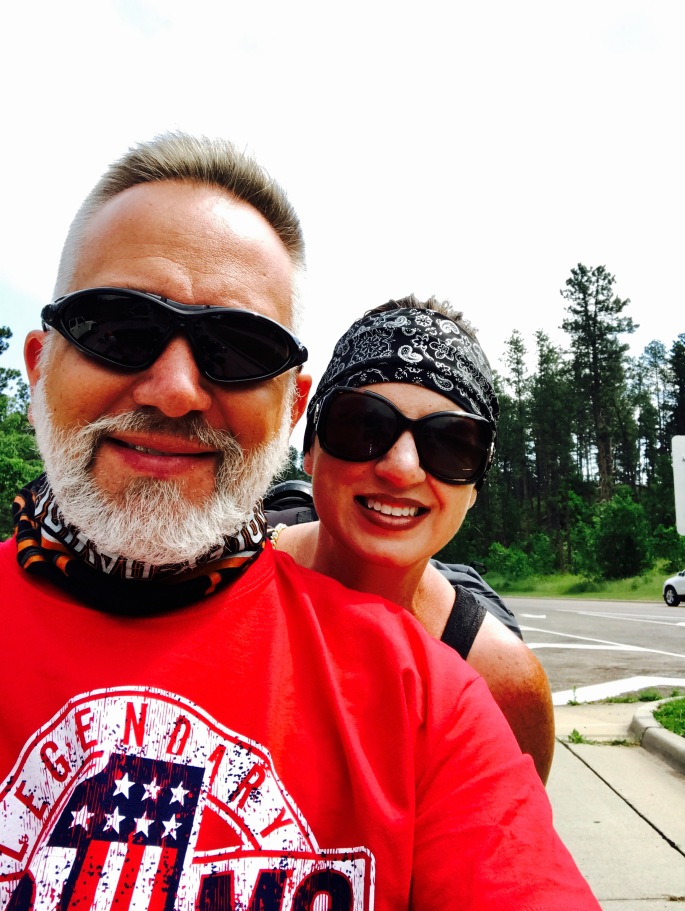 This site uses Akismet to reduce spam. Learn how your comment data is processed.

#Love #Truth #Kindness #Patience
Max was so young!! I guess we both were.
What #gas prices are you seeing?